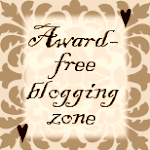 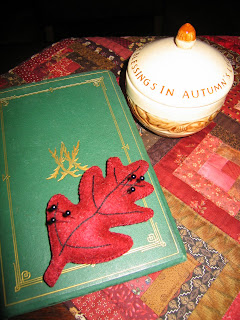 Angela who guessed 6 out of 7. Congratulations Angela!
Here is the second pincushion which is a fall leaf. Just about everyone guessed a leaf. Here are the ones I have picked for my seven pincushions:
Apple
Leaf
Acorn
Pumpkin
Toadstools
Corn
Squirrel
I was surprised that only one person came up with a squirrel. This made the deciding factor for you Angela.
I have decided to do one of the pincushions as a tutorial this week. I got the idea from Andrea on my homekeeping list who asked about where she could buy these patterns to make them herself. I am making them up literally as I go along. I am going to use the toadstool pincushion for the turtorial as I think my idea of how to put this one together will be simple and there will be no need for you to have a drawn pattern to follow. You will need red and white felt, white glass headed pins and filling. Join me later this week for this tutorial.
In the meantime, check back with me tomorrow for the next pincushion revealed.....
Posted by Heidi at 10:00 PM

Great job Heidi and YEAH Angela,
you did it. It looks like the leaf just floated onto the book Heidi. We will all be waiting for the next one.
Love you, Mom

I love the leaf Heidi! Congratulations to Angela for winning! And, I can't wait for the toadstool!

Bump bump bump...can you hear me jumping up and down on my seat. And, you will never believe, I was on the point of changing pie to pumpkin right up until I pressed the send button! I am so thrilled to win one of your competitions, they really have been exciting and have kept us popping back to your blog every spare minute. There is always something new to see and it's so interactive.
Such a pretty leaf, I love the colour and can't wait to see the other pincushions unfold together with the Season :>)
Count me in for the tutorial. I even have some felt...yay
Hugs, Angela

Yay!!! Happy dancing for Angela! Hey, I KNOW she has some felt, can't wait to see your pincushion, Angela....I mean the one you make!!!
How fun was that to play??? AND, I had squirrel written and crossed it off for cornucopia! Angela was meant to win this one!

Oh what a pretty leaf, pleased Anglea won and can imagine her jumping up and down. Hope to make the toadstool with you all. Thanks Heidi for all your inspiration. Love Hazel

Oh my, a squirrel, you are far more talented than I. :) The leaf is adorable, not that we expected anything less! Can't wait to see the tutorial! Congratulations, Angela!

Hi Heidi! (BTW, my favorite doll as a child was a HI Heidi..). anywho, you are very welcome and I appreciate that you allowed me to share your wonderful creations! I found Nancy via your blog and love her work, too, along with all the other ladies who x stitch. Yes, I need to do more. This is the perfect time of year to start stitching. I will be sharing more things that I made soon. B.O.L.

Happy Tuesday to you, too!

That was fun Heidi.
Congratulations to Angela!